A native of New York City, she grew up on a steady diet of various subcultures and underground music. Influenced by  the alternative comics scene, she began self-publishing her work in 2003. Since then she's sold her work at local NYC comic cons, including NYCC, MoCCA, and Big Apple. Clients include MTV Press, The Brooklyn Rail and Vice Magazine. Currently she's retired one title, Babalon Babes, but still works on Psycho Bunny.

You can purchase her comics and art online via PayPal or Etsy. Michele is also available for commissions. 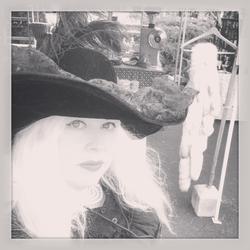